ANNOUNCER: Today we present you a short story written by the late sci-fi author Jakob Miller from the town of Neumat. With Jakob’s career cut tragically short, many of his works are either unfinished, or don’t exist in a definitive version. Today’s story was discovered with three different endings. With no indication which one is final, we decided to release all of them. You can find the two additional versions in your feed.

NARRATOR: Aliens landed on Earth on the 16th of March, early in the morning. They announced their approach 60 days in advance, via a tweet. Unfortunately, the account they took control of had 27 followers, with foreseeable impact for their social media reach. It was only after astronomers detected an object approaching Earth at rapid speed that someone remembered seeing a message stating the vessel’s landing location in the south Pacific and the exact arrival date. The time to react however was now cut from two months to two days. Which meant a significant number of balls was likely going to be dropped.

Flat-footed leaders of the G7 immediately convened an emergency meeting. This was no time for fearfulness; they knew a resolute response was expected. Not as a gesture towards the aliens - heavens no, if the extraterrestrials were hostile we were all bamboo in a panda zoo. All they would need to do is park in orbit and throw rocks on us and the best we could do was open an umbrella. Instead, the bold move the heads of the G7 deliberated was lowering the interest rates. After all, it would be a tad embarrassing if the aliens came to visit and the economy was in recession.

Mercifully, the fact that the aliens messaged in advance suggested their intentions were benevolent - generally speaking, one does not send an RSVP for an invasion. So the world leaders started to discuss the best strategy to receive the unexpected guests. Their usual impulse to close the borders wasn’t exactly an option in this case, so they began setting up a welcoming committee, the goal of which was to show the visitors just enough decorum without it getting interpreted as a moving-in party.

Therefore they stuffed the room with sociologists, linguists, and behavioural scientists, who all recommended choosing one representative to greet the aliens, both in order to avoid overwhelming them, and to ensure the message was kept on point. However, as is often the case with scientific advice, it suffered from an acute lack of geo-political feasibility. I mean, who would dare to assume such a responsibility? We were talking about a situation in which a single diplomatic faux pas might lead to annihilation of the entire human race, which would surely not go down well with the general electorate. With all the eyes in the room on them, the leaders found theirs pointed squarely at the floor.

It was then that the Italian prime minister stood up and solemnly declared that he would take the role of the ambassador, which prompted the rest of the leaders to deeply reflect - both on what it meant for their public image not to appear in front of the aliens personally, and why was Italy in the G7 to begin with. Not wanting to be outdone, one by one each of the leaders rose and proclaimed they would welcome the aliens in person as well. Some even volunteered to bring their spouses.

Standing in line next to a wall, the scientists observed with a mixture of horror and disappointment how their advice to pick a sole envoy produced a posse of more than twenty people. But not even their sad looks could sully the glory of this moment, in which the heads of governments shook hands and valiantly vowed to dispel this foreign menace.

The jubilation only deflated when a junior aide shared the news that Russia and China had already dispatched warships to the south Pacific.

On the day of the first contact, every head of state with a modicum of self-respect was standing on a navy boat in the South Pacific Ocean, sporting a rarely seen fashion combination of a tie and life jacket. Unsurprisingly, the media embraced the topic with ardent enthusiasm, covering the approach of the spacecraft in real time. News stations broadcast consisted solely of interviews with experts, as if alien invasions were an area in which it was possible to find specialists on LinkedIn. Their predictions were diverse, but all shared a common sentiment: nothing was ever going to be the same.

Zoomed in to the max, the cameras mounted on ships finally caught a grainy glimpse of the approaching object burning in the upper atmosphere. It was a small capsule, approximately the size of a minivan. Once it reached a lower altitude, the module’s descent was retarded by three simultaneously deployed parachutes, and it splashed down with the elegance of a cannonball.

It took a few moments for the module’s floatation devices to inflate and for it to stop wobbling. Once it did, its entrance graciously opened, and six creatures emerged. They were wearing red astronaut suits and their anatomy was clearly humanoid. This was anticipated by some experts who surmised aliens might take human form to minimize alarm caused by their real appearance. Whether this was the case or not, it was definitely handy, as having hands meant that the aliens were able to gesture to the observers to approach.

A motorboat containing the joint G7 crew separated from the rest of the flotilla and set its course towards the still steaming module. The Russian and the Chinese boats decided to keep their personal space.

Once the motorboat approached to a shouting distance, aliens removed the helmets of their space suits, and ambassadors could clearly discern their faces. All six of them looked like men in their late 60-ies and early 70-ies. One of them even had a mustache.

It was the Canadian prime minister who spoke first, enthusing the people of Earth are honoured to offer their hospitality in the spirit of cosmic brotherhood. Then he repeated his reception in French. The aliens looked at each other, a bit confused. Finally, the mustached one spoke, saying in fluent English they too came in peace and brotherhood. He then added he doesn't speak French.

As a matter of fact, English was the only language the aliens spoke. And no, they hadn’t taken this form in order to not frighten members of the welcome party. In fact, they sounded slightly annoyed when asked about it.

The atmosphere was getting a bit awkward, as if both sides were expecting the other one to make the first move, even though it wasn’t all that obvious what that move should be. Finally, it was the German prime minister’s wife who asked the aliens why they came.

To which one of them looked at her with a gentle smile, the like you would direct to a kid who just blew his line in a high school recital: “My child, we are not aliens. We are angels.”

It was the French president who was the first to come up with a question, which - while perhaps not the most pertinent - at least broke the impasse: “But where are your wings?”

“Do you have wings?” - the angel prodded, to which the French president simply said: “No.”

“Well there's your answer then.” - said the angel, good humoredly. “I mean, it's all written in The Book. You have read The Book, haven't you?”

The delegation looked like they were just asked to cosign a loan.

While their understanding of The Book was shaky at best, the one thing they all could have sworn on the aforementioned book is that angels have wings. With none of them majoring in art history, they of course couldn’t have known that wings were first added to depictions of angels 600 years after the scripture had been written. It was not the first time artists and their liberty got people into trouble.

It was the Japanese prime minister who changed the subject: ”Aliens or angels: why are you here?”

“Oh we just had a bit of a problem with our vessel. Please, don't mind us, we'll be on our way soon enough.”

“So you’re only here because you’ve had to make an emergency landing?”

“Something like that. But don't you worry, we're getting picked up and will be out of your hair in a few. So terribly sorry to bother you.”

The G7 looked at each other.

“Would you mind if... If we asked you a few questions?”

Now it was the angels who were put on the spot. They knew no good could come of this.

“Yes!” - said one of the angels quickly, before adding: “Well, no. There's just this, this small difference.”

“Oh, don't worry about it. For all intents and purposes, we are the same. At least for a while.”

“You want to say that you are immortal?”

“Well, yes. All creation is. The beings on this planet are the sole exception. But the rest of the universe, totally immortal, yes.”

“Yes, yes. But no reason to get hung up on it. Not much you can change about that now, right? Better to focus on the positives.”

At that moment, the sky above opened and a vessel lowered surrounded by thunder.

“Oh would you look at that, our ride is here. I guess this is it. Kind regards, as I believe you say.”

ANNOUNCER: Here ends the manuscript. If you would like to hear the two alternative endings, look for them in The Program audio series feed. The stories diverge at 7 minutes and 55 seconds. This episode of the Program was made by three people: Jacqueline Ainsworth, Christien Ledroit, and IMS. Main music theme by Matt Podd. Visit programaudioseries.com for more details. This is also where you will find a link to a webshop selling merchandise from the show. Every purchase supports the series, so open your hearts and your wallets and get a hoodie.

WRITTEN, DIRECTED, EDITED AND PRODUCED BY: 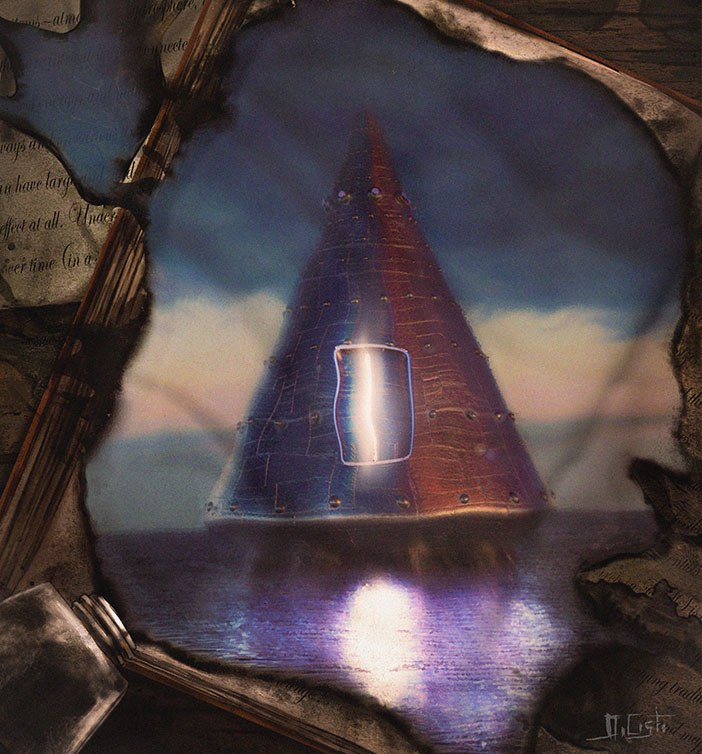